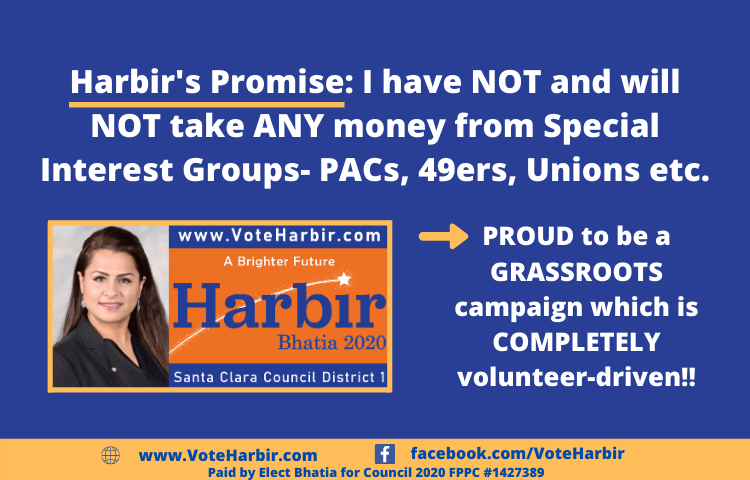 I am proud that we have led a completely grassroots campaign and have made ourselves known. It’s been a wonderful journey so far, and it’s been an adventure of hard work and team work. Whatever happens, we feel we have won. Firstly, we raised the awareness about the City and its issues, and how to address them. Secondly, by working hard, as a team, for 5 months with an honest and clean campaign and efforts, we have shown our youth and future leaders how an ethical, volunteer-driven and grassroots campaign SHOULD really be run.

SEE ALL MY FUNDING SOURCES HERE: A matter of public record and completely transparent: click here and see for yourself. Search For  ‘Harbir’ and the committee and funding sources will be listed.

Response to the questions about POA, the 49ers, and the Citizens For Efficient Government and Full Voting Rights

The propaganda that I have been working with the 49ers is absolutely false. I have not taken any funds nor have I coordinated, in communication, collaboration or anything else for that matter, with them. They have funded an Independent Expenditure Committee called, Citizens for Efficient Government and Full Voting Rights, per the request of Mike Honda’s request to support his goal for a diverse council, as we learned from the various news sites.

“​In an email sent to the 49ers in September, former congressman Mike Honda, representing the PAC, asked the team “to support our independent efforts to help qualified women and minority candidates have a fighting chance at representing their districts on the city council.” – Mercury News Article

The truth is PACs and Special Interest Groups have been involved in Santa Clara elections for years, mostly those that were in collaboration with the Mayor and her candidates. In 2016, 2018, 2020 the POA and Unions and others have been supporting either Kathy Watanabe, the Mayor Lisa Gillmor and Nancy Biaginni, and Pat Nikolai, and opposing the candidates that were running against them. However, this year there is no difference from usual. This year there are more PACs involved each supporting different candidates and opposing others.

At the Oct 22 Press Conference by the Mayor at the City Hall, the POA representative said that they are involved every year because they have interests in making sure they can get their candidates elected. For me, that is a huge concern and seems very inappropriate. Should the Police, Fire, and overall essential services be involved in politics? Just like the military, I would think they should be nonpolitical and focus on law enforcement and protection, the essential services.

The reason why my opponent and the Mayor are making so much noise is because their PACs have been outspent by the other.  Usually, they are the ones controlling the narrative with their PAC mailers. They have NEVER cried foul against the POA and other PACs when they support THEM (every election including 2016, 2018, 2020)! However, this time it’s not them. So they are calling foul when in fact there are PACs campaigning for their favorite and against the opponent.

Myself (D1), Park (D4), Jain (D5), and Becker (D6) as the nonpoliticians, professionals, and minority community leaders have been bundled into one slate and opposed by the Mayor, my opponent Kathy W, and their PACs. The ‘establishment’ slate of candidates is the existing politicians Kathy Watanabe (D1) and Teresa O’Neil (D4) and Bob O’Keefe (D5) (Retired CHP officer) and Rob Mezzetti (D6) (lawyer and lobbyist)- who are all supported by the Mayor and the POA, Fire, Unions, and others. Then there is one other candidate, Gautam Barve (aka Gary Barve) for (D6).

The worst part of this is the opposition creating absolute lies to discredit me. I just didn’t think they would go that far as to make up pure lies. This just tells you badly they want to win. They don’t have much else to stand on so they try to discredit, deflect, misdirect. See this is old politics, politics as usual, which people are tired of and they don’t need or want more of this. People want trustworthy individuals who are driven by causes and service.

Our democracy is at risk when we don’t work with truth. These days there is so much false news. So it’s really important to take multiple inputs and do your own research. Maybe this is all part of the transition of society going from a few media sources to large cable outlets, social media, and online tools that allow everyone and anyone to speak. However, there is means more work for the people to find the truth. So I say get multiple opinions from multiple sources.

I wish the PACs hadn’t gotten involved. They could have used their resources to support the community members with COVID-Relief efforts. However, I can’t directly tell them but I can still wish it. Imagine all the funds the PACs have invested if they could have been put to creating value for the community rather tha ‘politics as usual’. That definitely would have been far better for the residents. Maybe a competition of who can do more for the public and solve societal issues- like who is the better public servant 🙂

Coming back to the point, my opponent and the opposition slate are threatened. I am a more qualified candidate, with more experience, and far more years of community leadership and service. This makes me a far more independent thinker, who would make decisions on what’s best for the community and our city, rather than land deals or personal agendas. Again, this is what scares them! I am not beholden to anyone nor owe anyone anything, except for the residents, my family, and God.

The opposition will continue to fill the air with pollution so you don’t see the truths about their past actions and plans that will directly affect the lives and future of the city.

See the list of issues facing the city caused by the current majority bloc of council members. The current trajectory of the city is heading towards a crisis of the future.

Read: LIST OF CHALLENGES FACING OUR CITY and KNOW THE FACTS BROCHURE

2nd FALSE ATTACK AND FLYER about my role at SiliconSage. My role was a Community Benefits director for a short period. I took the job to learn and include more benefits for the kids. I advised our leadership on innovative and creative ideas to address the community needs by improving site design, meeting the needs of small businesses, affordable housing, and coming up with ideas to create enriching spaces, and more. However, the City Clerk abused his power by creating documentation that I was under investigation for Lobbying, when I wasn’t a lobbyist. However to create the scenario, he started the process…Find out the full story here.

We don’t need people that will abuse their powers, misrepresent the facts, and falsify information to win the council seat. Imagine if they are doing this during the election so openly, what else they might be doing otherwise, behind closed doors and in backroom deals.

Proposal of Approach for the First 180 Days